The equation of motion of a mass-spring-damper system is
my +cy + ky = f(t) (9.5-1) As with the Control System toolbox, Simulink can accepts a system description in transfer-function form and in state-variable form. (See Section 8.7 for a discussion
of these forms.) If the mass-spring system is subjected to a sinusoidal forcing function f(I), it is easy to use the MATLAB commands presented thus far to solve and plot the response y(I). However, suppose that the force f(t) is created 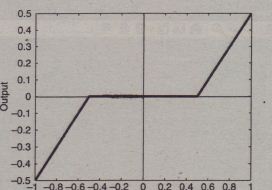 nonlinearity. This means that the piston does not generate a force until the input voltage exceeds a certain magnitude, and thus the system model is piecewise linear. A graph of a particular dead-zone nonlinearity is shown in Figure 9.5-1. When the input (the independent variable on the graph) is between -0.5 and 0.5, the output is zero. When the input is greater than or equal to the upper limit of 0.5, the output is the input minus the upper limit. When the input is less than or equal to the lower limit of -0.5, the output is the input minus the lower limit. In this example, the dead zone is symmetric about 0, but it need not be in general. Simulations with dead-zone nonlinearities are somewhat tedious to program in MATLAB, but are easily done in Simulink. The following example illustrates how it is done.