MATLAB can create figures that contain an array of plots, called subplots. These
are useful’ when you want to compare the same data plotted with different axis
types, for example. The MATI…ABsubplot command creates such figures.
We frequently need to plot more than one curve or data set on a single plot.
Such a plot is called an overlay plot. This section describes several MATLAB
commands for creating o.verlayplots.
Subplots
You-can use the subplot command to obtain several smaller “subplots” in
the same figure. The syntax is subplot (rn , n, p). This command divides the
Figure window into an array of rectangular panes with m rows and n columns. The
variable p tells MATLAB to place the output of the plot command following
the subplot command into ‘the ptij, pane. For example, subplot (3,2, 5)
creates an array of six panes, three panes deep and two panes across, and directs:
the next plot to appear in the fifth pane (in the bottom-left comer). The following:
script file created Figure 5.2-1, which shows the plots of the functions y =
e-l.2x sin(10x +5) for 0 ~ x ~ 5 and y = Ix3 – 1001for -6 ~ x ~ 6.
x = [0:0.01:5];
y = exp(-1.2*x}.*sin(10*x+5};
subplot(1,2,1}
plot(x,y},xlabel(‘x’},ylabel(‘y’),axis([O 5 -1 1])
x = [-6:0.01:6];
‘:;:”.
~:” , 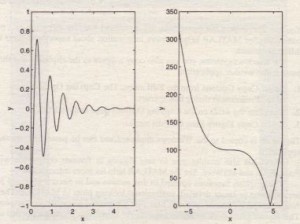 Application of the subplot command. 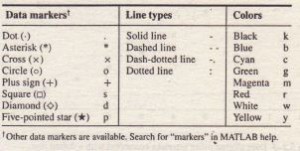 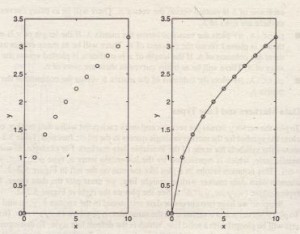 Use of data markers 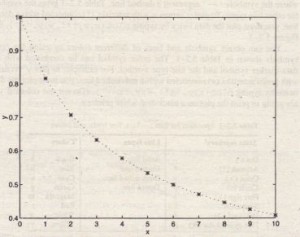 Labeling Curves and Data
When more than one curve or data set is plotted on a graph, we must distinguish
between them. If we use different data symbols or different line types, then we
must either provide a legend or place a label next to each curve. To create a legend,
use the legend command. The basic form of this command is legend
(,stringl’ ,,string2′ ),where stringl and string2 are text strings
of your choice. The legend command automatically obtains from the plot
the line type used for each data set and displays a sample of this line type in the
legend box next to the string you selected. The following script file produced the
plot in Figure 5.2-4.
x = [0:0.01:2];
y sinh (x)i
z tanh (x)i
plot(x,y,x,z,’–‘),xlabel(‘~’),
ylabel(‘Hyperbolic Sine and Tangent’),
legend(‘sinh(x)’, ‘tanh(x)’)
The legend command must be placed somewhere after the plot command.
When the plot appears in the Figure window, use the mouse to position the legend
box. (Hold down the left button on a two-button mouse to move the box.) 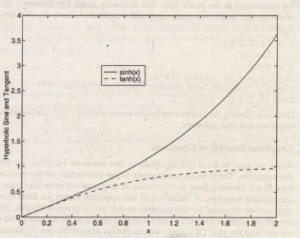 Application of the legend command

Gridlines can obscure the legend box. To prevent this situation, instead of
placing the legend command as shown in the preceding session, type the
following lines in the Command window, after the plot appears in the Figure
window but before printing the plot:
»axes(legend(‘string1’, ‘string2’»
»refresh
The first line makes the legend box act as the current set of drawing axes. The
refresh command forces the plot to be redrawn in the Figure window. You
can then print the plot. The axes command, not to be confused with the axis
command, is a powerful command with man§’ features for manipulating figures
in MATLAB. However, this advanced topic is not covered in this text.
Another way to distinguish curves is to place a label next to each. The label can
bt! generated with either the gt ext command, which lets you place the label using
the mouse, or with the t ext command, which requires you to specify the coordinates
of the label. The syntax of the gt’ext command is gtext ( , string’ ),
where string is a text string that specifies the label of your choice. When this
command is executed, MATLAB waits for a mouse button or a key10 be pressed
while the mouse pointer is within the Figure window; the label is placed at that
position of the mouse pointer. You may use more than one gtext command for
a given plot. .’
The text command, text (x,y,’ string’), adds a text string to the
plot at the location specified by the coordinates x , y. These coordinates are in
the same units as the plot’s data. The following script file illustrates the uses
of the gtext and text commands and was used to create the plot shown in
Figure 5.2-5.
x [0:0.01:1);
y = tan(x);
z = see(x};
plot (x,y, x, z) ,xlabel (‘x’), ….
ylabel(‘Tangent and Seeant’),gtext(‘tan(x) ‘),
text (0.3,1.2, , see (xl’ )
Of course, finding the proper coordinates to use with the text command usually
requires some trial and error.

Graphical Solution of Equations
When we need to solve two equations in two unknown variables, we can plot
the equations. The solution corresponds to the intersection of the two lines. If
they do not intersect, there is no solution. If they intersect more than once, there
are multiple solutions. A limitation of this approach is that we must know the
approximate ranges of the two variables so that we can generate the plot. Another
limitation is that the accuracy of the solution is limited by the accuracy with which
we can read the plot. Of course, we can-always expand the plot to increase the
accuracy. 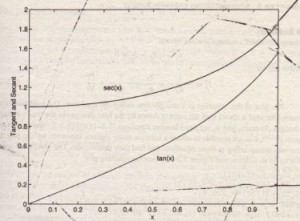 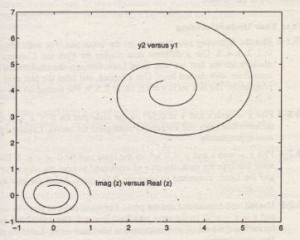 Application of the hold co-nrnand .

end up in the wrong position. ‘Table 5.2-2 summarizes.the plot enhancement
introduced in this section.‘

Annotating Plots
You can create text, titles, and labels that contain mathematical symbols, Greek
letters, and other effects such as italics. The features are based on the TEXtypesetting
language. Here we give a summary of these features. For more information,
including a list of the available characters, search the online help for “text
properties.”
The text, gtext., title,xlabel, and ylabel commands all require
a string as their argument. For example, typing
»title(‘A*exp(-t/tau)sin(omega t)’)
produces a title that looks like A*exp (- t / tau f sin (omegat) but is supposed
to represent the function Ae-I/f sin(wt). You can create a title that looks
like the mathematical function by typing
<:»
»titie(‘Ae”{- t/\tau}sin(\’o,mega t)’)
The backslash character \ precedes all TEXcharacter sequences. Thus the strings
\ t Q.u and \ omega represent the Greek letters. and co. Superscripts are created
by typing “;’ subscripts ate created by typing _. To set multiple characters as
superscripts or subscripts, enclose them in ‘braces. For example, type x_{13} to
produce XI3. ‘ ‘; •. ~
. In mathematical text variables are usually set in italic, and functions, like sin,
are set in roman type. To set a character, say, x, in italic using the TEXcommands,
you type {\ i t x I. To set the t i tl e function using these conventions, you
would type’ \ . .
»title(‘{\it Ae}”{-{\it t/\tau}}\sin({\it \omega t})’)

Hints CorImproving Plots
The following actions hile not required, can nevertheless improve the appearance
of your plots 1Start scales from zero-whenever possible. This technique prevents a false impression of the magnitudes of any variations shown on the plot.
2. Use sensible tick-mark spacing. For example, if the quantities are months,
choose a spacirlgQf.12 because 1/10 ofa year is not a convenient division.
~ Space tick marks as close as is useful, but no closer. For example, if the data
is given monthly over a range of 24 months, 48 tick marks would be too
dense,’ and also unnecessary Minimize the numr.bzero~ in the data being plotted. For example, use a scale in millions of ddll¥S when appropriate, instead of a scale in dollars with six zeros after every number. 4. Determine the minimum and maximum data values for each axis before plotting the data. Then set the axis limits to cover the entire data range plus an additional amount to allow convenient tick-mark spacing to be selected.

For example, if the data on the x-axis ranges from 1.2 to 9.6, a good choice
for axis limits is 0 to 10. This choice allows you to use a tick spacing of
lor 2.
5. Use a different line type for each curve when several are plotted on a single
plot and they cross each other; for example, use a solid line, a dashed
line, and combinations of lines and symbols. Beware of using colors to
distinguish plots if you are going to make black-and-white printouts and
photocopies.
6. Do not put many curves on one plot, particularly if they will be close to
each other or cross one another at several points.
7. Use the same scale limits and tick spacing on each plot if you need to
compare information on more than one plot.