Simulink Model of a Rocket-Propelled Sled

Simulink Model of a Rocket-Propelled Sled

A rocket-propelled sled on a track is represented in Figure 9.4-2 as a mass m with an applied force f that represents the rocket thrust. The rocket thrust initially is horizontal, but the engine accidentally pivots during firing and rotates with an angular acceleration of 8 = Jr/50 rad/s. Compute the sled’s velocity v for 0 ::: t ::: 6 if v(O) = O.The rocket thrust is 4000 N and the sled mass is 450 kg. The sled’s equation of motion is 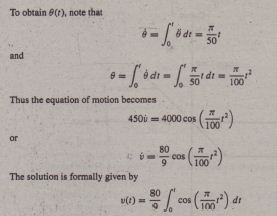 Unfortunately, no closed-form solution is available for the integral, which is called Fresnel,s cosine integral.The value of the integral has been tabulated numerically, but we will use simulink to obtain the solution. 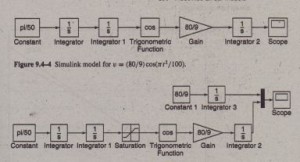 Set the Stop time to 10, run the simulation, and examine the results in the Scope. (b) Modify the model in Figure 9.4-4 as follows to obtain the model shown in 9.4-5. We use the Saturation block in the Discontinuities library to limit the range of  60π’/180 rad. After placing the block as shown in Figure 9.4-5, double-click on
type.60 * pi/18.0 in its upper Limit window. Then type 0 in its Lower Limit Enter and connect the remaining elements as shown, and run the simulation. The Constant block and Integrator block are used to generate the solution when the angle is (θ =. 0, as a check on our results. (The equation of motion for (θ = 0 ν = 80/9, which gives v(t) = 80t /9.)

If you prefer, you can substitute a To Work-space block for the Scope, add a Clock
and change the number of inputs to the Multi-block to three (do this by double-clicking on it). Then you can plot the results in MATLAB.The resulting plot is shown in Figure 9.4-6.