Script Files and the Editor/Debugger

You can perform operations in MATLAB in two ways:

Using the interactive mode is similar to using a calculator, but is convenient only for simpler problems. When the problem requires many commands, a repeated set of commands, or has arrays with many elements, the interactive mode is inconvenient. Fortunately, MATLAB allows you to write your own programs to avoid this difficulty. You write and save MATLAB programs in M-files, which have the extension. m; for example, program1. m

MATLAB uses two types of M-files: script files and function files. You can use the Editor Debugger built into MATLAB to create M-files. A script file contains a sequence of MATLAB commands, and is useful when to use many commands or arrays with many elements. Because they con tam commands, script files are sometimes called command files. You execute a script-file at the Command window prompt by typing its name without the extension.m.

Another type of M-file is a function file, which is useful when you need to repeat the operation of a set of commands. You can create your own function files.

Creating and Using a Script File

The symbol %designates a comment, which is not executed by MATLAB. Comments are not that useful for interactive sessions, and are used mainly in script files for the purpose of documenting the file. The comment symbol may be put anywhere in the line. MATLAB ignores everything to the right of the %symbol. For example, consider the following session.

Note that the portion of the line before the %sign is executed to compute x.
Here is a simple example that illustrates how to create, ‘save, and run a script file, using the Editor/Debugger built into MATLAB. However, you may use another text editor to create the file. The sample file is shown below. It computes the sine of the square root of several numbers and displays the results on the screen.

To create this new M-file (in the MS Windows environment), in the Command window select New from the File menu, then select M-file. You will then see a new edit window. This is the Editor/Debugger window as shown in Figure 1.4-1. Type in the file as shown above. You can use the keyboard and the Edit menu in the Editor/Debugger as you would in most word processors to create and edit the file. When finished, select Save from the File menu in the Editor/Debugger. In the dialog box that appears, replace the default name provided (usually named Untitled) with the name example1 , and click on Save. The Editor/Debugger will automatically provide the extension . m and save the file in the MATLAB current directory, which for now we will assume to be on the hard drive. 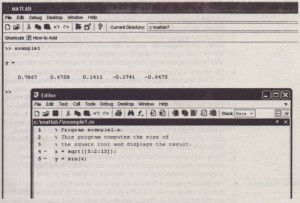 Figure 1.4-1 The MATLAB Command window with the Editor/Debugger open.

Once the file has been saved, in the MATLAB Command window type the script file’s name example1 to execute the program. You should see the result displayed in the Command window. The session looks like the following.

Effective Use of Script Files

Create script fiIes to avoid the need to retype commonly used procedures. The above file, example1 implements a very simple procedure, for which we ordinarily would not create a script file. However, it illustrates how a script file is useful. For example, to change the numbers evaluated from [3: 2 : 11] to [2 : 5 : 27] , simply edit tile corresponding line and save the file again (a common oversight is to forget to resave the file after making changes to it).

Here are some other things to keep in mind when using script files:

Note that not all functions supplied with MATLAB are “built-in” function. For example, the function mean.m is supplied but is not a built-in function. The command exist (‘ mean. m’, ‘file’ ) will return a 2, but the command exist (‘mean’, ‘builtin’) will return a O.You may think of builtin functions as primitives that form the basis for other MATLAB functions. You cannot view the entire file of a built-in function in a text editor. only the comments.

Effective Use of the Command and Editor/Debugger Window

Here are some tips on using the Command and Editor/Debugger window effectively.

Debugging a program is the process of finding and removing the “bugs,” or errors, in a program. Such errors usually fall into one of the following categories.

MATLAB error messages usually allow you to find syntax errors. However, runtime errors are more difficult to locate. To locate such an error, try the following:

A suggested structure for a script file is the following.

We emphasize again that you must document the units of measurement for all the input and all the output variables. More than one dramatic failure of an engineering system has been traced to the misunderstanding of the units used for the input and output variables of the program used to design the system. Table 1.4-1 lists common units and their abbreviations. The foot-pound-second system (FPS) is also called the U.S. Customary System and the British Engineering System. SI (Systeme Internationale) is the international metric system. 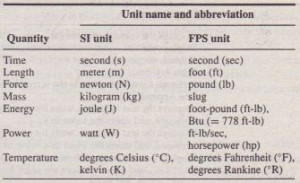 a set of daily temperature measurements at a particular location, which are needed from time to time for calculations. As a short example, consider the following script file, whose name is my data. m.The array temp_F contains temperatures in degrees Fahrenheit.

A session to access this data from the Command window, and convert the temperatures
to degrees Celsius, is

MATLAB provides several useful commands for obtaining input from the user and for formatting the output (the results obtained by executing the MATLAB commands). Table 1.4-2 summarizes these commands. The methods presented in this section are particularly useful with script files.

You already know how to determine the current value of any variable by t) ping its name and pressing Enter at the command prompt. However. this method. which is useful in the interactive mode, is not useful for script files. The disp function (short for “display”) can be used instead. Its syntax is di sp (A) , where A represents a MATL.A B variable name. Thus typing disp (Speed) causes the value of the variable Speed to appear on the screen, but not the variable’s name.

The disp function can also display text. You enclose the text within single quotes. For example, the command disp ( ‘The predicted speed is: ‘ ) causes the message to appear on the screen. This command can be used with the first form of the disp function in a script file as follows (assuming the value of Speed is 63):

When the file is run, these lines produce the following on the screen:
The predicted speed is:
63

The input function displays text on the screen, waits for the user to enter something from the keyboard, and then stores the input in the specified variable. For example, the command x = input ( ‘Please enter the value of x:’) causes the message to appear on the screen. If you type 5 and press
Enter, the variable x will have the value 5.

The function displays the menu whose title is in the string variable ‘ title and whose choices are string variables’ option1′, ‘option2’, and soon. The returned value of k is I, 2,… depending on whether you click on the button for option1, option2, and so forth. For example, the following script uses a menu to select the data marker for a graph, assuming that the vectors x and y already exist.

MatlabHelp.com > An Overview of MATLAB > Script Files and the Editor/Debugger