Review of Integration and Differentiation

Review of Integration and Differentiation

The integral of a function f(x) for a ≤ x ≤ b can be interpreted as the area between the f(x) curve and the x-axis, bounded by the limits x = a and x = b. Figure 8.1-1 illustrates this area. If we denote this area by A, then we can write A as

The integral is f(x):The lower and upper limits of integration here are a and b. the symbol x here is the variable of integration.
Integrals are often encountered in engineering applications. Here are some
examples:
Acceleration and velocity: An object’s velocity v(b) at time t = b, starting with velocity v(0) at t =0í is the integral of its acceleration a(t): 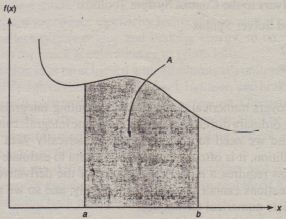 Velocity and distance: The position of an object moving at velocity v(t) from the time t = a to the time t = b and starting at position x(a) at t = a is

Work expended: The mechanical work done in pushing an object a distance d is the integral

where ƒ (x) is the force as a function of position x. For a linear spring ƒ(x) =kx, where k is the spring constant, and the work done against the spring ,is

In many applications one or both integral limits are variables. For example, an object’s velocity at time t is the integral of its acceleration. If the object is moving at time t = 0 with a velocity v(0),its velocity is given by

Integrals have the linearity property. If c and d are not functions of x, then

Another useful property of integrals is the following:

The integrals of many functions can be evaluated analytically. We can obtain a formula for the integral, and we are said to have obtained the answer in “closed form.” Here are some common examples that .you have probably seen before:

In such cases we must compute the definite integral using numerical methods.
These are treated in Section 8.2.

Some integrals have infinite values, depending on their integration limits. These
are called improper integrals. For example, the following integral can be found
in most integral tables: 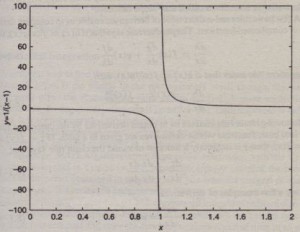 is improper: The same warning applies when using numerical methods to evaluate integrals. The points at which the integrand is undefined can cause problems for the numerical method.

Differentiation and integration are complementary operations. For example, if

then f (x) is the derivative of g(x) with respect to x. This relation is written as

The derivative of ƒ(x) can be interpreted geometrically as the slope of f (x). Thus the derivative is sometimes called the “slope function.
A few basic rules and a short table of derivatives enable us to compute derivatives
of complicated functions. The product rule says that if h (x) = ƒ(x )g(x), then

The following chain rule enables us to obtain derivatives by decomposing functions into basic functions whose derivatives are given in a table. If z = f(y) and if y = g(x), then z is indirectly a function of x, and the chain rule says that

Here are a few examples of derivatives:

Using this short table of derivatives and the product rule, we can show that

Use the chain rule with z = y 2 and y = sin x to obtain the following derivative: