We often do not have a simple probability distribution to describe the distribution of outcomes in many engineering applications. For example, the probability that a circuit. consisting of many components will fail is a function of the number and the .age’of the components, but we often cannot obtain a function to describe . the failure probability. In such cases engineers often resort to simulation to make predictions. The simulation program is executed many times, using a random set of numbers to represent the failure of one or more components, and the results are used to estimate the desired probability.

In a sequence of uniformly distributed random numbers, all values within a given interval are equally likely to occur. The MATLAB function rand generates random numbers uniformly distributed over the interval [0,1]. Type rand to obtain a single random number in the interval [0,1]. Typing rand again generates a different number because the MATLAB algorithm used for the rand function requires a “state” to start. MATLAB obtains this state from the computer’s CPU clock. Thus every time the rand function is used, a different result will be obtained. For example,
rand
ans =
0.6161
rand
ans =
0.5184

Type rand (n) to obtain an n x n matrix of uniformly distributed random numbers in the interval [0, 1]. Type rand (m, n) to obtain an m x n matrix of random numbers. For example, to create a 1 x 100 vector y having 100 random values in the interval [0, 1], type y = rand (1 ,100 ).Using the rand function this way is equivalent to typing rand 100 times. Even though there is a single call to the rand function, the rand function’s calculation has the effect of using a different state to obtain each of the 100 numbers so that they will be random.
Use Y = rand (m, n , p, … ) to generate a multidimensional array Y having random elements. Typing rand ( size (A) ) produces an array of random entries that is the same size as A.

The following session shows how to obtain the same sequence every time rand is called
» rand (‘state’,0)
» rand
ans =
0.9501 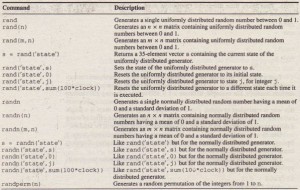 You need not start with the initial state in order to generate the same sequence. To show this, continue the above session as follows.

You can use rand to generate random results for games involving dice, for example, but you must use ‘it to create integers. An easier way is to-use the randperm (n) function, which generates a random permutation of the integers from 1 to n. For example, randperm (6) might generate the vector [3 2 6 4 1 5], or some other permutation of the numbers from 1 to 6. Note that randperm calls rand and therefore changes the state of the generator.

Simulations using random number generators can be used to analyze and find solutions to problems that are difficult or impossible to solve using standard mathematics. The following example illustrates this method.

The MATLAB function randn will generate a single number that is normally distributed with a mean equal to 0 and a standard deviation equal to 1. Type randn (n) to obtain an n x n matrix of such numbers. Type randn (m,n) to obtain an In x n matrix of random numbers .
The functions for retrieving and specifying the state of the normally distributed random number generator are identical to those for the uniformly distributed generator, except that r andn ( … ) replaces rand ( … ) in the syntax. These functions are summarized in Table 7.3-1.

For example, to generate a vector y containing 2000 random numbers normally distributed with a mean of 5 and a standard deviation of 3, you type y = 3*randn (1,2000) + 5. You can check the results with the mean and st.d functions. You should obtain values close to 5 and 3,respectively.

Functions of Random Variables      If y and x are linearly related, as
y = bx + c

However, it is easy ‘to see that the means and standard deviations do not combine in a straightforward fashion when the variables are related by a nonlinear function. For example, if x is-normally distributed with a mean of 0, and if y = X², it is easy to see that the mean of y is not 0, but is positive. In addition, y is not normally distributed.
Some advanced methods are available for deriving a formula for the mean and variance of y = f(x), but for our purposes, the simplest way is to use random number simulation.

It was noted in the previous section that the mean of the sum (or difference) of two independent normally distributed random variables equals the sum (or difference) of their means, but the variance is always the sum of the two variances. However, if z is a nonlinear function of x and y, then the mean and variance of z cannot be found with a simple formula. In fact, the distribution of z will not even be normal. This outcome is illustrated by the following example.