In Chapter 1 we introduced relational operators, such as > and =>. and the two types of loops used in MATLAB, the for loop and the while loop. These features, plus MATLAB functions and the logical operators to be introduced in Section 4.3, form the basis for constructing MATLAB programs to solve complex problems. Design of computer programs to solve complex problems needs to be done in a systematic manner from the start to avoid time-consuming and frustrating difficulties later in the process. In this section we show how to structure
and manage the design process

Not every problem can be solved with an algorithm and some potential algorithmic solutions can fail because they take too long to find a solution.

Structured Programming
Structured programming is a technique for designing programs in which a hierarchy of modules is used, each having a single entry and a single exit point, and in which control is passed downward through the structure without unconditional branches to higher levels of the structure. In MATLAB these modules can be built-in or user-defined functions. Control of the program flow uses the same three types of control structures
used in algorithms: sequential, conditional, and iterative. In general, any computer prog~~an be written with these three structures. This realization

A method for creating structured programs is top-down design, which aims to describe a program’s intended purpose at a very high level initially, and then partition the problem repeatedly into more detailed .levels, one level at a’ time until enough is understood about the program structure to enable it to be coded. Table 4.1-1, which is repeated from Chapter 1, summarizes the process of top own design. In step 4 you create the algorithms used to obtain the soluation that step 5, Write and Run the Program, is only part of the top-down disign process. In this step you create the necessary modules and test them separately.

Two types of charts aid in developing structured programs and in documenting them. These are structure charts and flowcharts. A structure chart is a graphical description showing how the different parts of the program are connected together. This type of diagram is particularly useful in the initial stages of top-down
design. . A structure chart displays the organization of a program without showing the details of the calculations and decision processes. For example, we can create program modules using function files that do specific, readily identifiable tasks. Larger programs are usually composed of a main program that calls on the modules to do their specialized tasks as needed. A structure chart shows the connection between the main program and the modules. For example, suppose you want to write a program that plays a game, say Tic-Tac-Toe. You would need a module to allow the human player to input a move, a module to update and display the game grid, and a module that contains the computer’s strategy for selecting its moves. Figure 4.1-1 shows the structure chart of such a program. . Flowcharts are useful for developing and documenting programs that contain conditional statements, because they can display the various paths (called “branches”) that a program can take, depending on how the conditional statements are executed. The flowchart representation of the i f statement is shown
in Figure 4.1-2. Flowcharts use the diamond symbol to indicate decision points. The usefulness of structure charts and flowcharts is limited by their size. For large, more complicated programs, it might be impractical to draw such charts. Nevertheless, for smaller projects, sketching a flowchart and/or a structure chart might help you organize your thoughts before beginning to write the specific MATLAB code. Because of the space required for such charts we do not use them in this text. You  are encouraged, however, to use them when solving problems.
Documenting programs properly is very important, even if you never give your programs to other people. If you need to modify one of your programs, you .

Structure chart of a game program. 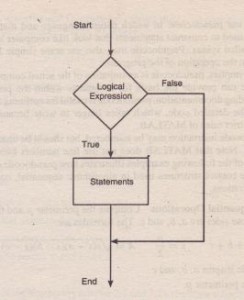 Flowchart
representation of the if
statement.

will find that it is often very difficult to recall how it operates if you have not used it for some time. Effective documentation can be accomplished with the use of

The advantage of using suitable variable names and comments is that they reside’
with the program; anyone who gets a copy of the program will see such documentation. However, they often do not provide enough of an overview of the . program. The latter three elements can provide such an overview

Pseudocode
Use of natural language, such as English, to describe algorithms often results in a description that is too verbose and is subject to misinterpretation. To avoid dealing immediately with the possibly complicated syntax of the programming language, we can instead use pseudo code, in which natural language and mathematical

expressions are used to construct statements that look like computer statements but without detailed syntax. Pseudo code may also use some simple MATLAB syntax to explain the operation of the program. As its name implies, pseudo code is an imitation of the actual computer code. The pseudo code can provide the basis for comments within the program. In addition to providing documentation, pseudo code is useful for outlining a program before writing the detailed code, which takes longer to write because it must conform to the strict rules of MA1LAB. Each pseudo code instruction may be numbered, but should be unambiguous and computable. Note that MA1LAB does not ‘use line numbers except in the Debugger. Each of the following examples illustrates how pseudo code can document each of the control structures used in algorithms: sequential, conditional, and iterative operations.

Compute the perimeter p and the area A
of a triangle whose sides are a, b, and c: The formulas are: 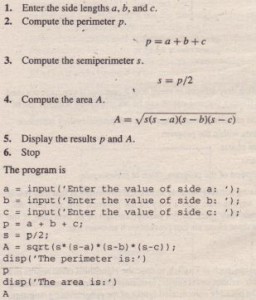 Example 2. Conditional Operations Given the (x, y) coordinates of a point.
compute its polar coordinates (r, (J). where

While the total is less than 20,000 compute the total

4. Display the current value of the counter.

5. Display the value of the total.

Debugging a program is the process of findinJnd removing the “bugs,” or errors, in a program. Such errors usually fall into one of the following categories.

The MATLAB error messages usually enable you to find syntax errors. However, runtime errors are more difficult to locate. To locate such an error, try the
following:

Large programs and software, including commercial software such as MATLAB, undergo a-rigorous process of development and testing before finally being released and approved for general use. The stages in this process are typically the
following.

This process can take quite a while, depending on the complexity of the program and the company’s dedication to producing quality software. In the case of MATLAB 7, there were approximately nine months between the first beta release and the final release of the completed software.