You can find the answers to problems marked with an asterisk at  he end of the text.

a. Create a vector v consisting of the elements in the second  olumn of A.

b. Create a vector w consisting of the elements in the second row of A.

6. Type this matrix in MATLAB and use MATLAB to answer the foIlowing questions:

a. Find the maximum and minimum values in each column.

b. Find the maximum and minimum values in each row.
9. Given the matrix

Use MATLAB to:
a. Find the result of A times B using the array product.
b. Find the result of A divided by B using array right division.
c. Find B raised to the third power element-by-element.
14.* The mechanical work W done in using a force F to push a block through a distance D is W = F D. The following table gives data on the amount of force used to push a block through the given distance over five segments of a certain path. The force varies because of the differing friction properties of the surface.

Use MATLAB to find (a) the work done on each segment of the path and
(b) the total work done over the entire path.
15. Plane A is heading southwest at 200 mi/hr, while plane B is heading west
at ISO mi/hr, What is the velocity and the speed of plane A relative to
plane B?
16. The following table shows the hourly wages, hours worked, and output (number of widgets produced) in one week for five widget makers

f. Assuming that the output of each worker has the same quality, which worker is the most efficient? Which is the least efficient? .
17. Two divers start at the surface and establish the following coordinate system: x is to the west, y is to the north, and z is down. Diver 1 swims 60 ft east, then 25 ft south, and then dives 30 ft. At the same time, diver 2
dives 20 ft, swims east 30 ft, and then south 55 ft. a. Compute the distance between diver 1 and the starting point.
b. How far in each direction must diver 1 swim to reach diver 2?
c. How far in a straight line must diver 1 swim to reach diver 2?
18. The potential energy stored in a spring is k x 2/2, where k is the spring constant and x is the compression in the spring. The force required to compress the spring is kx. The following table gives the data for five springs

Use MATLAB to find (0) the compression x in each spring and (b) the potential energy stored in each spring.
19. A company must purchase five kinds of material. The following table gives the price the company pays per ton for each material, along with the  number of tons purchased in the months of May, June, a~d July:

Use MATLAB to answer these questions:
a. Create a 5 x 3 matrix containing the amounts spent on each item for
each month.
b. What is the total spent in May? in June? in July?
c. What is the total spent on each material in the three-month period?
d. What is the total spent on all materials in the three-month period?
20. A fenced enclosure consists of a rectangle of length L and width 2R, and a semicircle of radius R, as shown in Figure P20. The enclosure is to be built to have an area A of 1600 ft2• The cost of the fence is $40/ft for
the curved portion, and $30/ft for the straight sides. Use the min function to determine with a resolution of 0.0 I foot the values of Rand L required to minimize the total cost of the fence. Also compute the minimum cost

21. A geometric series is defined as the sequence 1, x, x2, x3, … , in which the powers of x range over the integers from 0 to 00. The sum of the terms in a geometric series converges to the limiting value of 1/(1 – x) if
[x] < 1; otherwise the terms diverge. a. For x =0.63, compute the sum of the first 11 terms in the series, and
compare the result with the limiting value. Repeat for 51 and 101 terms. Do this by generating a vector of integers to use as the exponent of x; then use the sum function.
b. Repeat part (Q) using x = -0.63. .
22. A water tank consists of a cylindrical part of radius r and height h, and a hemispherical top. The tank is to be constructed to hold 500 m3 of fluid when filled. The surface area of the cylindrical part is Zn rh, and its
volume is Jrr2h. The surface area of the hemispherical top is given by 2Jrr2, and its volume is given by 2Jrr3 /3. The cost to construct the cylindrical part of the tank is $300/m2 of surface area; the hemispherical
part costs $400/m2• Plot the cost versus r for 2 ::: r ::: 10m, and determine the radius that results in the least cost. Compute the corresponding height h.
23. Write a MATLAB assignment statement for each of the following functions, assuming that w, x, y, and z are vector quantities of equal

24. In many engineering systems an electrical power source supplies current or voltage to a device called the “load.” A common example is an amplifier-speaker system. The load is the speaker, which requires current
from the amplifier to produce sound. Figure P24a shows the general representation of a source and load. The resistance RL is that of the load. Figure P24b shows the circuit representation of the system. The source
supplies a voltage Vs and a current is and has its own internal resistance Rs. For optimum efficiency, we want to maximize the power supplied to the speaker for given values of Vs and Rs. We can do so by properly
selecting the value of the load resistance RL. 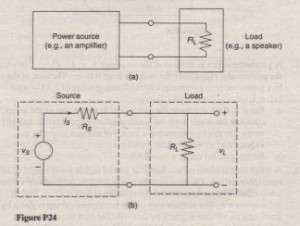 The power consumed by the load is PL = i~RL = vU RL. Using the relation’ between VL and Vs we can express PL in terms•of vs as

To maximize PL for a fixed value of vs, we must maximize the ratio

Consider the specific case where the source resistance can be
Rs = 10, 15,20, or 25 Q and where the available load resistances are
RL = 10, 15,20,25, and 30Q. For a specific value of Rs, determine
which value of RL will maximize the power transfer.
25. .Some current research in biomedical engineering deals with devices for measuring the medication levels in the blood and automatically adjusting the intravenous delivery rate to achieve the proper concentration (too high
a concentration will cause adverse reactions). To design such devices, engineers must develop a model of the concentration as a function of the dosage and of time.
a. After a dose, the concentration declines due to metabolic processes. The half-life of a medication is-the time required after an initial dosage for the concentration to be’ teduced by one-half. A common
model for this process is

where C(O) is the initial concentration, t is time (in hours), and k is called the elimination rate constant, which varies among individuals. For a particular bronchodilator, k has been estimated to be in the range 0.047 ~ k ~ 0.107 per hour. Find an expression for the half-life in terms of k, and obtain a plot of the half-life versus k for the
indicated range. b. If-the concentration is initially zero, and a constant delivery rate is started and maintained, the concentration as a function of time is described by:

where a is a constant that depends on the delivery rate. Plot the concentration .after one hour, C(l), versus k for the case where a = I and k is in the range 0.047 ~ k ~ 0.107 per hour. ‘
26. A cable of length Lc supports a beam of length Li; so that it is horizontal when the weight W is attached at the beam end. The principles of statics can be used to show that the tension force T in the cable is given by

where D is the distance of the cable attachment point to the beam pivot.
See Figure P26 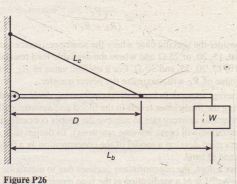 a. Forthe case where W = 400 N, Lb = 3 m, and L; = 5 m, use element~by-eleme.nt. o~erations an~ the rrii n fun7tlon to compute ~e value of D that mimrmzes the tension T: (Do not use, a loop.) / ..-
Compute the minimum tension value., ‘ b. Check the sensitivity of the solution by plotting T versus D. How:’
much can D vary from its optimal valuebefore the terision T ” .increases 10 percent above its minimum value?

27. * Use MATLAB to find the products AB and BA for the following matrices:

Use MATLAB to:
a. Verify the associative, property

b. Verify the distributive property

29. The following tables “show the costs associated with-a certain product and  the production volume for the four quarters of the business year MATLAB to find (a) the quarterly costs for materials, labor, and’ 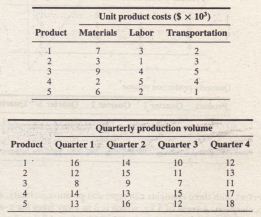 30.* Aluminum alloys are made by adding other elements to aluminum to improve its properties, such as hardness or tensile strength. The following table shows the composition of five commonly used alloys, which are
. known by their alloy numbers (2024, 6061, and so on) [Kutz, 1986]. Obtain a matrix algorithm to compute the amounts of raw materials needed to produce a given amount of each alloy. Use MATLAB to ,
determine how much raw material of each type is needed to produce 1000 tons of each alloy.

31. Redo Example 2.4-2 as a script file to allow the user to examine the effects of labor costs. Allow the user to input the four labor costs in the following table. When you run the file, it should display the quarterly costs
and the category costs. Run the file for the case where the unit labor costs are $3000, $7000, $4000,· and $8000, respectively.

b. What is the location of the mass when t = 5 s?
c. Compute the angular momentum vector L. What is its direction? 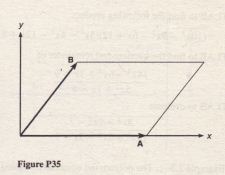 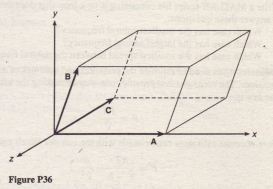 39. Use MATLAB to find the following product:

40.* Use MATLAB to find the quotient and remainder of

41.* Use MATLAB to evaluate

where the term b isa correction for the volume of the molecules, and the , term a/V2 is acorrection for molecular attractions. The values of a and b depend on the type of gas. The gas constant is R, the absolute temperature
is T, and the gas specific volume is V. If 1 mol of an ideal gas were confined to a volume of 22.41 L at ODC(273.2 K), it would exert a pressure of 1 atmosphere. In these units,R = 0.08206 .. For chlorine (Ch),a = 6.49 and b = 0.0562. Compare the specific volume estimates V given by the ideal gas law and the van der Waals
equation for 1 mol of Ch at 300 K and a pressure of 0.95 atmosphere . 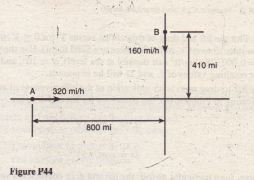 a. ·Obtain the expression for thedistance D between the aircraft as a ,function of time. Plot D versus time until D reaches its minimum value.
b. Use the root s function to compute the time when the aircraft are first within 30 mi of each other

where L and D are the lift and drag forces, V isthe airspeed, S is the wing span, p is the air density, and CL and Co are the lift and drag coefficients. Both CLand Co depend on a, the angle of attack, the angle between the
relative air velocity and the airfoil’s chord line. . ‘ . Wind tunnel experiments for a particular airfoil have resulted in the following formulas (We will see in Chapter 5 how such formulas can be obtained from data)

47. The lift-to-drag ratio is an indication of the effectiveness of an airfoil. Referring to Problem 46, the equations for lift and drag are

where, for a particular airfoil, the lift and drag coefficients versus angle of attack a ‘are given by

Using the first two equations, we see that the lift-to-drag ratio is given simply by the ratio CL/CD•

Section 2.6
48. a. Use both cell indexing and content indexing to create the following 2 x 2 cell array

b. What are the contents of the (1,1) element in the (2,1) cell in this array?
49. The capacitance of two parallel conductors of length L and radius ‘r ; separated by a distance d in air, is given by