You have recently taken a position as the engineer in charge of your company’s seasonal
product, which is manufactured during the off-season. You want to determine the optimum production level. If you produce more units than you can sell, your profit will not be as large as it could be; if you produce too many units, the unsold units at the end of the season will hurt profits. A review of the company’s records shows that the fixed cost of production is $30,000 per season, no matter how many units are made, and that it costs $2000 above fixed cost to make one unit. In addition, past sales have fluctuated between 25 and units per season, with no increasing or decreasing trend in the sales data. Your sales estimates that you cannot raise the price above $4000 because of the competition.

Given that the previous sales were always between 25 and 50 units per.season, with no trend in the data, the most reasonable model for the sales is a uniform distribution over the interval [25, 50]. In the following script file, the vector cost is the cost as a function of production level (the number of units produced). The loop over k computes the profit for each of the 26 production levels starting with 25 and ending with $0. The loop over m does a random number simulation to compute the profit, for a particular production level. The variable demand represents the demand for the product; it is a uniformly distributed number in the interval [25, 50]. If the demand is greater than the number of units produced, then all the units will be sold and the income is $4000 times the number produced. If the demand is less’ than’ the number of units produced, then the income is $4000 times the number sold plus $1000 times the number unsold, which is the number produced minus the demand. For each random demand, the profit is computed as the difference between the income and the cost. This amount is the scalar profit. The cumulative profit profit is the sum of profits for all the random simulations for a particular production level. The expected profit expect ed jar of i t; for a particular production level is the profit for that level averaged over all the random simulations. 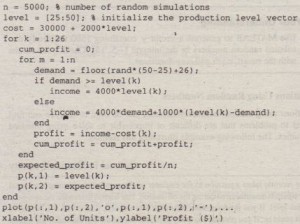 The choice of 5000 simulations was a somewhat arbitrary compromise between accuracy and the amount of time required to do the calculations. The more simulations, the more accurate the results, but the program will take longer to finish, Th~ results are shown in Figure 7.3-1. The maximum profit is attained for a production level in the range of 39 to