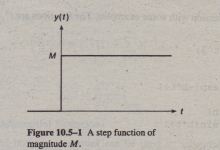 for most of the commonly encountered functions if suitable restrictions are placed on s. An alternative notation is the use of the uppercase symbol to represent the transform of the corresponding lowercase symbol; that is,
Y(s) = £[y(t)]
We will use the one-sided transform. which assumes that the variable y(l) is 0 for 1 < O. For example, the stepfunction is such a function. Its name comes from the STEP FUNCfION fact that its graph looks like a stair step (see Figure 10.5-1).  The height of the step is M and is called the magnitude. The unit-step function,
denoted Us(I), has a height of M = 1 and is defined as follows:
{ o 1 < 0 us(t) = 1 t > 0
indeterminate t = 0
The engineering literature generally uses the term- step function, whereas the mathematical literature uses the name Heaviside -function. The Symbolic Math toolbox includes the Heaviside (t) function, which produces a unitstep function.
A step function of height M can be written as y(t) = Mus(t). Its transform
is
£[y(t)] = roo MUs(l)e-Sfdt = M100
e-stdt = -M e-
Sf
1
00
= M Jo _ 0 s 0 s
where we have assumed that the real part of s is greater than 0, so that the limit of e-st exists as t “-+ 00. Similar considerations of ~ region of convergence of the integral apply for other functions of time. ‘However, we need not concern ourselves with this topic here, because the transforms of all the common functions  have been calculated and tabulated. They can be obtained in MATLAB with the Symbolic Math toolbox by typing laplace (function), where function is a symbolic expression representing the function y(t) in (10.5-1). The default
independent variable is t, and the default result is a function of s. The optional form is laplace (function,x,y), where function is a function ofx and y is the Laplace variable.

If 1(/) is a unit-step function, F(s) = lis and the forced response is
x(t) = C- [ 1 ] I
s(s2 + l.4s + I)
To find the forced response, enter
,.
»ilaplace(1/(s*(s~2+1.4*s+1»)
The answer obtained is
x(t) = 1 – «?” [cos (~/) + 7~ sin (~t) 1 (10.5-13)
Input Derivatives Two similar mechanical systems are shown in Figure 10.5-2. In both cases the
input is a displacement y(t). Their equations of motion are mx +eX +kx =ky +cy (10.5-14)
” mx +eX +kx = ky (10.5-15) The only difference between these systems is that the system in Figure 1O.5-2a
has an equation of motion containing the derivative of the input function y(t). Both systems are examples of the more general differential equation mx +eX +kx =dy +gy (10.5-16) As noted earlier, you can use the Heaviside function with the dsolve function to find the step response of equations’ containing derivatives of the input,
but the resulting expressions are more complicated than those obtained with the Laplace transform method.
We now demonstrate how to use the Laplace transform to find the step response of equations containing derivatives of the input. Suppose the initial conditions are zero. Then transforming (10.5-16) gives 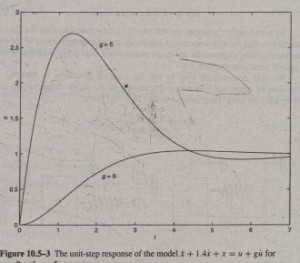 Impulse Response
The area A under the curve of the pulse function shown in Figure 1O.5-4a is called the strength of the pulse. If we let the pulse duration T approach 0 while keeping the area A constant, we obtain the impulse function of strength A, represented by Figure 1O.5-4b.If the strength is 1,we have a unit impulse. The impulse can be thought of as the derivative of the step function and is a mathematical abstraction for convenience in analyzing the response of systems subjected to an input that is applied and removed suddenly, such as the force from a hammer blow. The engineering literature generally uses the term impulse function, whereas the mathematical literature uses the name Dirac delta function. The Symbolic Math toolbox includes the Dirac (t) function, which returns a unit impulse. You can use the Dirac function with the dsol ve function when the input function is an impulse, but the resulting expressions are more complicated than those obtained with the Laplace transform. It can be shown that the transform of an impulse of strength A is simply A. So, for example, to find the impulse response of i + l.4x +x = f(t), where f(t) is an impulse of strength A, for zero inital conditions; first obtain the transform 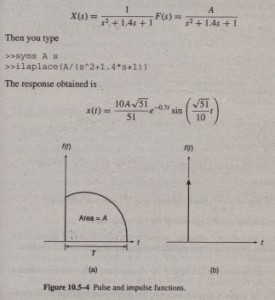 4. Substitute a symbolic variable, here L, for the expression laplace (y (t) , t, s) in the algebraic equation. Then solve the equation for the variable L, which is the transform of the solution.
5. Invert L to find the solution as a function of t. Note that this procedure can also be used to solve sets of equations.