Home » Programming with MATLAB » Flight of an Instrumented Rocket

Flight of an Instrumented Rocket

Flight of an Instrumented Rocket

All rockets lose weight as they bum fuel; thus the mass of the system is variable. The following equations describe the speed v and height h of a rocket launched vertically, neglecting air resistance. They can be derived from Newton’s law

where mo is the rocket’s initial mass, q is the rate at which the rocket bums fuel mass, u is the exhaust velocity of the burned fuel relative to the rocket, axd g is the acceleration due to gravity. Let b be the bum time, after which all the fuel is consumed. Thus the rocket’s mass without fuel is m, = mo – qb. For t > b the rocket engine no longer produces thrust, and the speed and height are given by

The time tp’ to reach the peak height is found by setting vet) = O. The result is tp =
b + v(b)/g. Substituting this expression into the expression (4.~) for h(t) gives the
following expression for the peak height: hp = h(b) + v2(b)/(2g). The time at which the rocket hits the ground is thit = tp + J2hp/g. Suppose the rocket is carrying instruments to study the upper atmosphere, and we need to determine the amount of time spent above 50,000 feet as a function of the bum 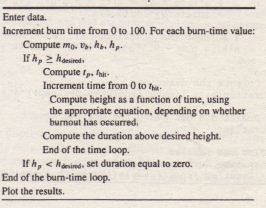 time b (and thus as a function of the fuel mass qb). As ume that we are given the following values: III, = 100 slugs, q = I slug/see, u = 8000 Nsec, and g ••• 32.2 ftlsec2• If the rocket’s maximum fuel load is 100 lugs, the maximum value of b is 100/q – 100. Wrile a MATLAB program to solve this problem.
soluation
Pseudocode for developing the program appears in Table 4.5-1. A for loop is a logical choice to solve this problem because we know the burn time band thlll the time it takes jo hit the ground. A MATLAB program to solve this problem appears in Table 4.5-2. It has two nested for loops. The inner loop is over time and evaluates the equations of 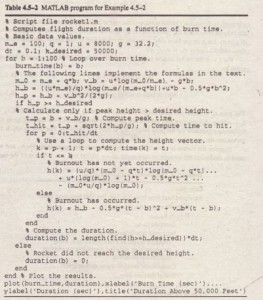 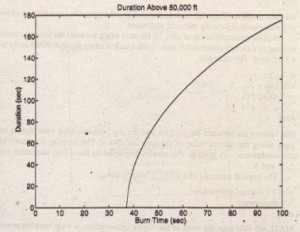 Duration above 50,000 ft as a fJJnctlonof the bum time

motion at times spaced 1/10 of a second apart. this loop calculates the duration above 50,000 feet for a specific value of the bum time b. We can obtain more accuracy by using a smaller’ value of the time increment dt. The outer loop varies the bum time in integer values from b = I to b = 100. The final result is the vector of durations for the various bum times. Figure 4.5-2 gives the resulting plot.