sometimes it is possible to check the numerical results by using an approximation that reduces the equation to a linear one. The following example illustrates such an approach with a second-order equation.

Matrix Methods
We can use matrix operations to reduce the number of lines to be typed in the derivative function file. For example, the following equation describes the motion of a mass connected to a spring with viscous friction acting between the mass and the surface. Another force f(t) also acts on the mass (see Figure 8.6-3). 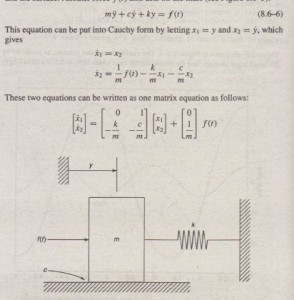 A mass and spring with viscous surface friction 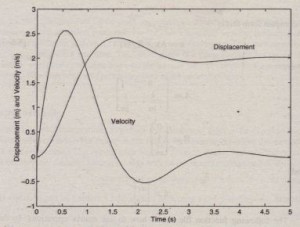 Displacement and velocity of the mass as a function of time.

Test Your Understanding
18.6-1 Plot the position and velocity of a mass with a spring and damping having the parameter values m = 2, c = 3, and k = 7. The applied force is f = 35, the initial position is y(O) = 2, and the initial velocity is
y(O) =-3.
Characteristic Roots from the eig Function
We saw in Section 8.4 that you can obtain the characteristic polynomial and roots for a linear ODE by substituting yet) =Aesl for the dependent variable yet). However, when the ODE is in state-variable form, there is more than one dependent variable. In such cases you must substitute Xl(t) = AlesI, X2(/) = A2esl
for the dependent variables Xl (I), X2(t), …. For example, making these substitutions into the following
Xl = -3XI +X2
X2 = -XI -7X2
gives
sAlesl = -3Alesl +A2esl
sA2esI = -AleSI -7A2esl