To increase the magnitude of a vector, multiply it by a scalar. For example, to double the magnitude of the vector r = [ 3 , 5, 2] •multiply each component by two to obtain [6, 10 , 4 ] . In MATLAB you type v = 2 *r. See Figure 2.3-1 for the geometric interpretation of scalar multiplication of a vector in three dimensional space. Multiplying a matrix A by a scalar w produces a matrix whose elements are the elements of A multiplied hf w. For example 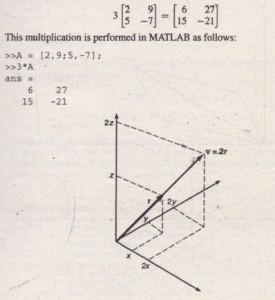 Figure 2.3-1 Geometric
interpretation of scalar
multiplication of a vector.

Vector addition can be done either graphically (by using the parallelogram law in two dimensions (see Figure 2.3-2a), or analytically by adding the corresponding 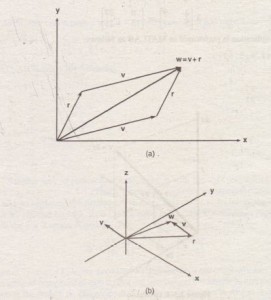 Figure 2.3-2 ‘yector addition. (a) The parallelogram law.
(b) Addition of vectors in three dimensions.

A+B
ans =
15 6
-2 17
Array addition and subtraction are associative and commutative. For addition these properties mean that

Array addition and subtraction require that both arrays have the same size. The only exception to this rule in MATLAB occurs when we add or subtract a scalar to or from an array. In this case the scalar is added or subtracted from each element in the array. Table 2.3-1 gives examples.

Array Multiplication
The data in Table 2.3-2 illustrates the difference between the two types of multiplication that are defined in ~TLAB. The table gives the speed of an aircraft on each leg of a certain trip and the time spent on each leg. We can define a row vector’ s containing the speeds and: a row vector t containing the times for each leg. Thus s = [ 2 00 I 250 I 400 I 300] and t = [ 2 I 5 I 3 I 4 ] . To find the miles traveled on each leg, we multiply the speed by the time. To do so, we use the MATLAB symbol . *, which specifies the multiplication s . * t to produce the row vector whose elements are the products of the corresponding elements in s and t:

With this notation the symbol .. * sigmfies that each element in s is multiplied by
the corresponding element in t and that the resulting products are used to form a row vector having the same number of elements as s and t. This vector contains the miles traveled by the aircraft on each leg of the trip. .
If we had wanted to find.only tile total miles traveled, we could have used another definition of multiplication, denoted by s*t I • In this definition the productis the sum of the individual element products; that is

Aircraft speeds and times per leg

MATLAB defines element-by-element multiplication only for arrays that have the same size. The definition of the product x . *y, where x and y each have n elements, is

Note that x I is a column vector with size 3 x 1 and thus does not have the same size as y, whose size is 1 x 3. Thus for the vectors x and y the operations x I • *y and y. *x I are not defined in MATLAB and will generate an error
message.
The generalization of array multiplication to arrays with more than one row or column is straightforward. Both arrays must have the same size. If they are matrices, they must have the same number of rows and the same number of columns.The array operations are performed between the elements in corresponding locations
in the arrays. For example, the array multiplication operation A. *B results in a matrix C that has the same size as A and B and has the elements cij = aijbij For example, if

With element-by-element multiplication, it is important to remember that the dot (.) and the asterisk (*) form one symbol It might have been better to bave defined a single symbol for this operation, but the developers of MATLAB were limited by the selection of symbols on the keyboard .

However, when multiplying or dividing these functions, or wren raising them to a power, you must use element-by-element operations if the arguments are arrays. For example, to compute z = (eY sin x)cos2 x, you must Itype Z = exp (y) . *sin (x ) . * (cos (x) ) . “2. Obviously, you will get an ,rror message if the size of x is not the same as the size of y. The result z will have the same size as x and y. 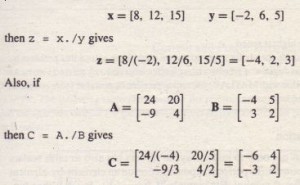 The array left division operator (. \) is defined to perform element-by-element division using left division. Refer to Table 2.3-1 for examples. Note that A. \B is not equivalent to A. lB.

When the function z = f tx , y) is evaluated in MATLAB using array operations, the-resulting 111 x 11 matrix z has the elements Z;j = I(x;, Yj). We can extend this technique to functions of more than two variables by using multidimensional arrays