the components with commas for improved readability if we desire so that the equivalent way of writing the preceding vector is [5, 7, 2]. This expression is a row vector, which is a horizontal arrangement of the elements.We can also express the vector as a column vector, which has a vertical arrangement, as follows:

A vector can have only one column, or only one row. Thus, a vector is a special case of an array. In general, arrays can have more than one column and more than’ one row.

Although a position vector cannot have more than three components, the concept of a vector can be generalized to any number of components. In MATLAB a vector is simply a list of scalars, whose order of appearance in the list might be significant, as it is when specifying xyz coordinates. As another example, suppose we measure the temperature of an object once every hour. We can represent the measurements as a vector, and the 1Oth element in the list is the temperature measured at the 10th hour.

To create a row vector in MATLAB, you simply type the elements inside a pair of square brackets, separating the elements with a space or a contma. Brackets are required for arrays in some cases, but not all. To improve readability, we will always use them. The choice between a space or comma is a matter of personal.

preference, although the chance of an error is less if you use a comma. (You can also use a comma followed by a space for maximum readability.) To create a column vector, you can separate the elements by semicolon .

Alternatively, you can create a row vector and then use the transpose notation (,), which converts a row vector into a column vector, or vice versa. For example:

An array is a collection of scalars arranged in a logical structure. An array may have a single row; if so, it is called a row vector. A column vector has a single column. An array can have multiple rows, multiple columns, or both. Such a two-dimensional array is called a matrix. In mathe’w~tical text we often use boldface type to indicate vectors and matrices, for e~’!idiple,A. If possible, vectors • -I’ are usually denoted by lowercase letters and matrices by  ppercase letters. An example of a matrix having three rows and two columns is

We sometimes represent a matrix A as [ai)] to indicate its elements aij). The subscripts i and j-called indices-indicate the row and column location of the element aij. The row number must always come first! For example, the element a32 is in row 3. column 2. Two matrices A and B are equal if they have the same size and if all their corresponding elements are equal; that is, a;’j =bi) for every value of i and j .

The most direct way to create a matrix is to type the matrix row by ow, separating the elements in a given row with spaces or commas and separating the rows with semicolons. For example, typing.

Remember, spaces’or commas separate elements in different columns, whereas semicolons separate elements in different rows.
If the matrix has many elements, you can press Enter and continue typing
on the next line. MATLAB knows you are finished entering the  atrix when you type the closing bracket (] ).
You can also create a matrix from row or column vectors. A row vector r can be appended to a matrix A if r and A have the same number of columns. The command B = [A r] appends the row vector r to the matrix A. This increases the number of columns in A. Use a semicolon to increase the number of rows. The command B = [Ai r] appends the row vector r to the matrix A. Note the difference between the results given by [a b) and [a i b) in the following session:, 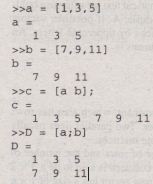 Matrices and the Transpose Operation

The transpose operation interchanges the rows and columns.In mathematics text . we denote this operation by the superscript T. For an m x n matrix A with m rows and n columns, AT (read “A transpose”) is an n x m matrix. For example, if

Array indices are the row and column numbers of an element in an array and are used to keep track of the array’s elements. For example, the notation v (5) refers to the fifth element in the vector v, and A (2, 3) refers to the element in row 2, column 3 in the matrix A. The. row number is always listed first! This notation enables you to correct entries in an array without retyping the entire array. For example, to change the element in row 1, column 3 of a matrix D to 6, you can type D (1, 3) = 6.
The colon operator selects individual elements, rows, columns, or  subarrays”
of arrays. Here are some examples:  v ( : ) represents all the row or column elements of the vector v.  v (2 : S) represents the second through fifth elements; that is v (2 ) , v (3 ) , v(4),v(5).
A( : , 3) denotes all the elements in the third column of the matrix  .
A ( : , 2 : 5) denotes all the elements in the second through fifth  columns
of A ( 2 : 3 , 1 : 3) denotes all the elements in the secend and third rows that are also in the first through third columns.
You can se array indices to extract a smaller array from another  array. For example, If you create the array B

you can produce the following array

Because A did not have five columns, its size is automatically expanded to accept the new element in column 5. MATLAB adds zeros to fill out the remaining elements.
MATLAB does not accept negative or zero indices, but you can use  egative
increments with the colon operator. For example, typing B = A ( : , 5 : -1 : 1 )
reverses the order of the columns in A and produces

be x and y. If you then type A ( : I 1) = x to create the first column, MATLAB displays an error message telling you that the number of rows in A and x must be the same. MATLAB thinks A should be a 2 x 2 matrix because A was previously defined to have only two rows and its values remain in memory. The clear command wipes A and all other variables from memory and avoids this error. To clear A only, type clear A before typing A( : 11) = x.

MATLAB has many functions for working with arrays (see Table 2.1-1). Here is a summary of some of the more commonly used functions. The max (A) function returns the algebraically greatest element in A if A is a vector having all real elements. It returns a row vector containing the greatest elements in each column if A is a matrix containing all real elements. If any of the elements are complex, max (A) returns the element that has the largest 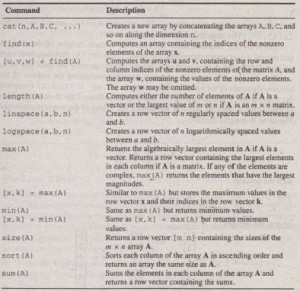 magnitude. The syntax Ix , k] = max(A) is similar to max(A), but it stores the maximum values in the row vector x and their indices in the row vector k. The functions min (Al and [x, k] = min (Al are the same as ax …. and [x, k] = max(Al except that they return minimum values. The function size (Al returns a row vector [m n] containing the sizes of the m x n array A. The length (Al function computes either the number 0 elements of A if A is a vector or the largest value of In or Il if A is an m x n matrix. For example, if

The vectors u and v give the (row, column) indices of the nonzero values, which are listed in w. For example, the second entries in u and v give the indices (3, 0, which specifies the element in row 3, column 1 of A, whose value is 2. These functions are summarized in Table 2.1-1.

Magnitude, Length, and Absolute Value of a Vector

The browser appears as shown in Figure 2.1-2. Workspace operations you can perform with the Workspace Browser or with functions are:

Here we discuss the first three operations. The last three operations are  discussed
3 and 4. Keep in mind that the Desktop menus are context-sensitive. Thus their con-” tents will change depending on which features of the Browser and Array Edit you are currently using. The Workspace Browser shows the name of each variable, its value, array size, size in bytes, and class. The icon for each variable illustrates its class. To resize the columns of information, drag the column header borders. To show or hide any of the columns, or to specify the sort order, use the View menu.
From the Workspace Browser you can open the Array Editor to view  and edit a visual representation of two-dimensional numeric arrays, with the rows and columns numbered. To open the Array Editor from the Workspace Browser, double-click on the variable you want to open. The Array Editor opens, displaying the values for the selected variable. The Array Editor appears as shown in Figure 2.1-3. To open a variable, you can also right-click it and use the Context menu.Repeat the steps to open additional variables into the Array Editor.In the Array 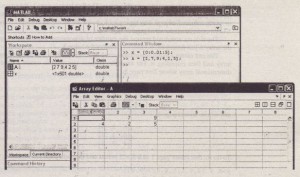 Editor, access each variable via its tab at the bottom of the window,  or use the Window menu. You can also open the Array Editor directly from the Command window by typing open ( “va r ‘ ) , where var is the name of the variable to be edited. Once an array is  displayed in the Array Editor, you can change a value in the array  by clicking on its location, typing in the new value, and pressing Enter. ‘Right-clicking on a variable brings up the Context menu, which can be used to edit, save, or clear the selected variable, or to plot the rows of the variable versus its columns (this type of plot is discussed 5). You can also clear a variable from the Workspace Browser by first highlighting it in the Browser, then clicking on Delete in the Edit menu.